The screen of any device is vitally important to its function. It is the interface by which the device transfers information to the user. In most smartphones, the screen also doubles as the keyboard, and a keyboard is the link between the user and the device. Without a functioning screen, the device is essentially, useless.

Screens, being made of glass (and in most cases sensitive to touch input) are not reparable. The only recourse for a screen that has been broken, smashed, cracked, has a damaged digitizer or is non-responsive is smartphone screen replacement.

Some common screen problems include:

If you touch icons, try to scroll or essentially try to take any action on your smartphone and nothing happens, you may have an unresponsive display. The best case scenario in this case is that you have a third party app that isn’t functioning as desired. A quick reboot and uninstall of this app could solve your problem, but if it is a hardware fault you need to send you device in for repairs.

The blank screen issue could be due to a variety of issues. It could be some app or software glitch, or it could be that the battery doesn’t have enough power to activate the screen. If a charge and reboot of your phone does not activate the screen, sending the device in for repairs is the best option.

Small dots on the screen that won’t go away and don’t change colours are referred to a ‘dead pixels’. While sometimes they can be caused by a software fault, more often they are the result of physical damage. 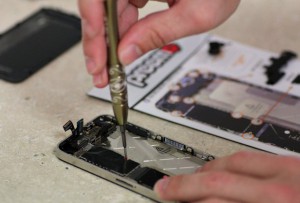 The Best team for the job

With a proven track record of problem resolution and customer satisfaction, Oakville tech will ensure your smartphone screen replacement will be done in record time. Contact us today on to book in your smartphone.